What Is Allspice And How To Make A Substitute

This post may contain affiliate links, my full disclosure can be read here. As an Amazon Associate I earn from qualifying purchases.

Are you curious about what is allspice? Learn more about this interesting spice and how to make your own allspice substitute for your recipes. 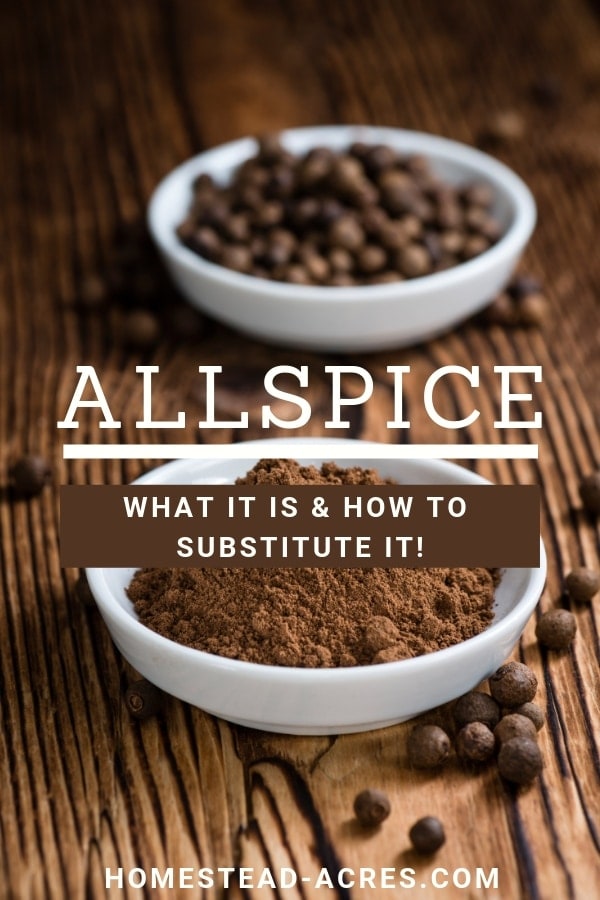 As you are preparing for your fall and holiday baking sessions you will probably come across allspice listed in the ingredients of many recipes.

You May Also Enjoy:

But do you know what allspice is?

You might think that it is a combination of spices that are mixed together, something like pumpkin pie spice but no that’s not it!

Allspice is a unique spice that is actually a dried berry from the Pimenta silica plant grown in the West Indies and it’s often used to add flavor to fall dishes like cider.

It’s sold as both dried berries and as a ground spice.

Why Is It Called Allspice?

Allspice gets its name from the unique aroma it has. Allspice smells like a combination of spices like cinnamon, nutmeg, ginger, and cloves.

What’s The Difference Between Allspice And Mixed Spice?

Allspice is a dried berry that is a single spice that has the scents of many fall and holiday spices.

Whereas Mixed Spice is a blend of several spices such as cinnamon, nutmeg, coriander seed, caraway, ginger, and cloves. Mixed spice is traditionally used in British cooking and is similar to pumpkin pie spice. 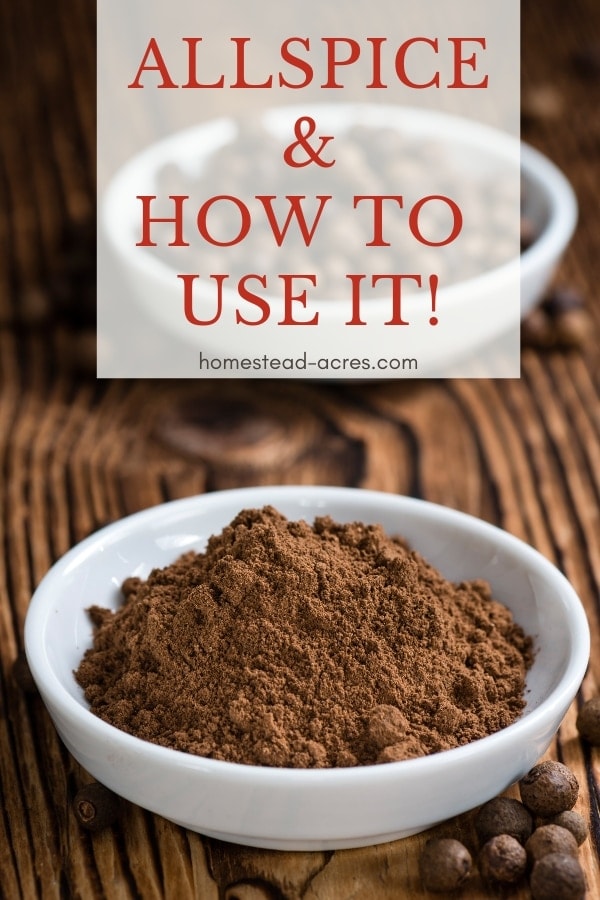 Ways You Can Use Allspice

Allspice is a very unique spice in that its flavors are similar to other fall spices that are commonly used like cinnamon, nutmeg, and cloves.

You might not know that you can make a substitute for allspice with these 3 spices if you can’t find allspice at the store or just ran out while you were baking.

This also means that you can use allspice as a substitute for cinnamon, nutmeg, and cloves in your baking as well!

Allspice is perfect for making spiced apple cider, and making fall and Christmas treats both sweet and savory.

The whole berries can be added to teas and cider while they are steeping to give it a warm flavor. Whereas the ground spice is better for baking with. 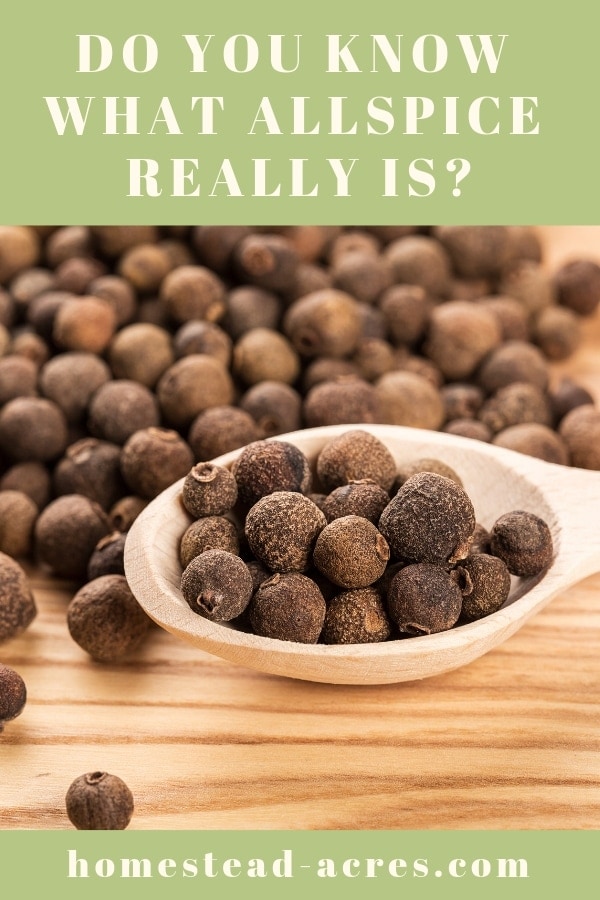 Now that you know what allspice really is, make sure to pick some up for your next cooking session! 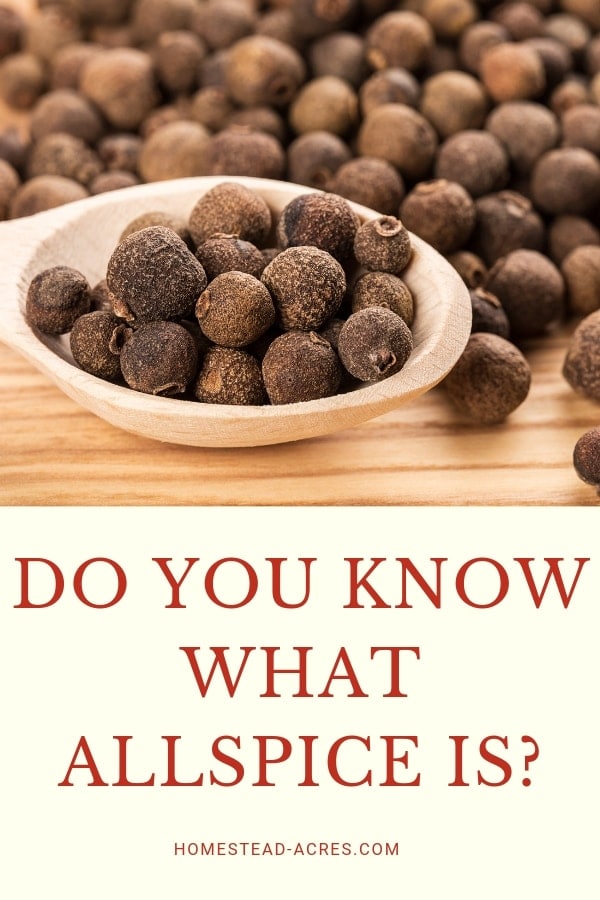 How To Make An Allspice Substitute

If you don’t have any allspice on hand and are making a recipe that calls for it you can make your own allspice substitute.

It’s really easy to make and is a lot cheaper than buying allspice too!

This blend works great in baking recipes that need allspice. If you prefer a spice blend that isn’t as strong you can reduce the nutmeg and ground cloves to 1/4 tsp.

This blend works great in baking recipes that need allspice. If you prefer a spice blend that isn’t as strong you can reduce the nutmeg and ground cloves to 1/4 tsp.

Did you make this recipe?

Kim Mills is a homeschooling mom of 6 and lives on an urban homestead in Ontario, Canada. Blogging at Homestead Acres she enjoys sharing tips to help you save money, grow and preserve your own food. 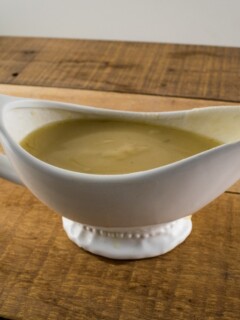 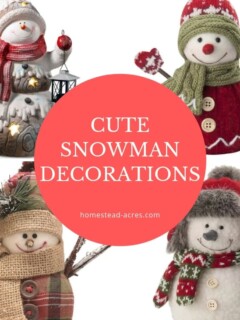 Next
Snowman Figurines You Will Love
Click here to cancel reply.

I had planned to read this back when you first wrote it but life happens eh? It's funny, I'm reading this post and I had remnants of mom talking to me about all spice and how to use it and therefore some of what you said was like "Oh, I know that", and then you added new information and I learned new things. It's SO GOOD to do that. And now I know what to use as a substitute for the days I run out!

I’m a life long homesteader teaching old-fashioned skills to help you live a simple life no matter where you live. If you are interested in growing food, cooking from scratch, and living a simple lifestyle, you're in the right place!